DISTRIBUTION OF CHEMICAL ELEMENTS IN SEDIMENTS AND ALLUVIUM SOILS FROM THE PČINJA RIVER BASIN, NORTH MACEDONIA

In this work, the distribution of chemical elements in sediment and alluvial soil samples from the Pčinja river basin was investigated. For this purpose, samples of sediments and natural and anthropogenic alluvium soils from the river and lake plains were collected along the course of the Pčinja river in the period from June to July 2017, according to a previously established sampling network with 10 sites on the rivers and 4 sites on the Glažnja and Lipkovo lakes. In addition to five sites on the Pčinja river, two samples were collected from the river of Tabanovska and one sample from the each tributaries of Kumanovsk, Konjarska and Kriva rivers. At each site, the following samples were collected: river sediment, lake sediment and natural alluvium (topsoil sample, 0–5 cm, and subsoil sample, 20–30 cm). In all samples collected, 22 macro- and trace elements (Аg, Al, As, Ba, Ca, Cd, Co, Cr, Cu, Fe, K, Li, Mg, Mn, Mo, Na, P, Ni, Pb, Sr, V and Zn) were analyzed by inductively coupled plasma – atomic emission spectrometry (ICP-AES). The contents of almost all the analyzed elements are within the expected values and are consistent with the lithology of the area studied. A multivariate factor analysis was applied to analyze the relationships between the number of variables. The method includes processing information from a large number of original variables and processing them into a smaller set (factor) with minimal loss of information from the original variables. From the obtained results, spatial distribution maps of the factors for each group and distribution maps the analyzed elements were created. It was found that the distribution of most elements follows the lithology of the study area, with the exception of some elements (As, Cu, P) whose increased contents are to urban, industrial and agricultural activities. 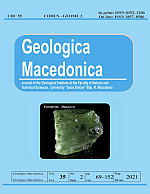