The distribution of 23 chemical elements (Ag, Al, As, B, Ba, Ca, Cd, Co, Cr, Cu, Fe, K, Li, Mg, Mn, Mo, Na, Ni, P, Pb, Sr, V and Zn) in sediments and alluvial soils from the entire basin of the river of Crna Reka, Republic of North Macedonia, is presented. In total 31 sediments and 31 soil samples were collected, from which 9 locations are from the river of Crna Reka and 4 from four main tributaries of Crna Reka in the Pelagonia Valley (Blato, Prilepska Reka, Dragor and Jelaška Reka). Also, sediments and soil samples were collected from 3 locations at the shore of the Tikveš Lake, 8 locations from the rivers of Majdanska Reka and Blašnica before its inflow into Tikveš Lake, and from 7 locations of the lower course of the Crna Reka river after the dam of Tikveš Lake until its inflow into the river of Vardar. Determination of the contents of the investigated elements was performed by atomic emission spectrometry with inductively coupled plasma (ICP-AES). All data obtained for the analyzed samples were statistically processed using software Stat Soft 11.0. The maps of spatial distribution of the contents for each element and a histogram with the mean values of the contents for each element by regions were also prepared. In the matrix of the load factors for the elements in the sediment and soil samples there are five factors. Factor 1 includes the chemical elements Mg, Ba, Li, Sr, Al and Ca. Factor 2 includes the chemical elements V, Fe and Cu, while factor 3 includes Ni, Cr and As. Factor 4 includes Pb and Zn, while factor 5 includes Na, P and K. The correlation coefficients matrix for sediments and soil samples from whole investigated area showed that there is a strong correlation between the contents of the elements: Sr-Mg (0.85), Ba-Al (0.83), Mg-Ba (0.83), Ni-As (0.81), Sr-Ba (0.81), Sr-Ca (0.81), V-Fe (0.80), Mn-Al (0.80), Sr-Al (0.79), Mg-Al (0.74), Mn-Fe (0.74) and Mg-Ca (0.70). The obtained results show that the main sources of anthropogenic pollution in whole area of the Crna Reka river basin originate from the rivers of Blašnica and Majdanska Reka as a result of anthropogenic mining activities in that region. 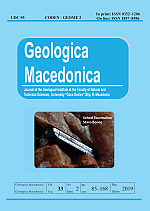