Abstract
REBCO (Rare-Earth Barium Copper Oxide) pancake coils without turn-to-turn insulation, called noinsulation
(NI) winding technique, have shown a high thermal stability against normal state transition. REBCO
is the 2nd-generation high-temperature superconductor (HTS) with great properties. In recent years, NI REBCO
coils have been desired for practical ultra-high magnetic field applications. It has been reported, as an
experimental result, that the excitation delay, which is a problem of the conventional NI REBCO pancake coils,
is improved by coils wound with multi-bundled REBCO conductor (MB NI REBCO coils). As an operating current
may not be evenly distributed in each bundled tape due to the different inductances, the current distribution in
MB NI coils is complicated. Therefore, we must clarify the excitation characteristics and the current and thermal
stability of MB NI REBCO pancake coils using numerical simulation. We also compared the cases with and
without insulation between turns. For a current simulation, an MB NI REBCO coil is modeled using a Partial
Element Equivalent Circuit (PEEC) method. From the simulation results, it was confirmed that the excitation
delay was improved by a multi-bundled REBCO conductor. Furthermore, we found that the MB NI REBCO coil
without turn-to-turn insulation was the most stable because the current could be distributed widely, not
concentrated.
Key words
HTS magnets, No-insulation, thermal-stability, ultra-high field. 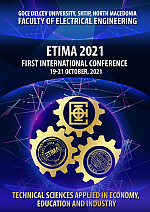