Europe has always been a destination that has attracted tourists with its rich cultural and historical heritage. Changes in tourists’ needs and demands have led to significant alterations on the tourism market. In fact, there has been a development of different specific forms of tourism with increasingly larger significance, and among them cultural tourism stands out. The development of cultural tourism has led to the appearance of a project called “European Capitals of Culture” which enables select cities to present their cultural life and culture itself to the entire world. That way these cities realize numerous positive effects, promotion on the tourism market, but also a chance to be recognized by tourists as an attractive destination of cultural tourism. The aim of this work is to emphasize the significance of cultural tourism in Europe, primarily using Athens as an example, but also to point out the necessary changes in order to preserve cultural heritage of Europe.
Key Words: culture, tourism, Athens, Europe, cultural heritage.
JEL classification: Z3, Z32 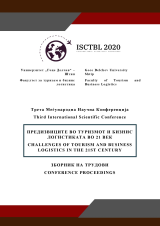