The research was performed on 11 oats genotypes in terms of organic production, of which 3 are domestic populations (Krivogastani, Trebenista and Kuceviste) and the rest are introduced varieties including: Rajac, Slavuj and Lovken from Serbia, and varieties Kupa, Baranja, Eksplorer Sampionka and Istra, from Croatia. The greatest energy of germination had a variety Kupa (96%), while the lowest energy of germination had variety Rajac (70%). There are very significant statistical differences among the varieties. The highest percentage of total germination in the year of examination showed the oats seed of the varietiy Kupa (96%), while the lowest total germination had variety Rajac (74%). Compared between varieties, it points to the conclusion that there are statistically significant differences. 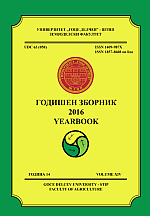