This study relates to performing healthcare of seed and mercantile potatoes on imports, as well as sampling at cross border entry points in the Republic of North Macedonia, for the period 2014-2017. Plant pathogens control is in accordance with the monitoring program for seed and mercantile potatoes in our country, and refer to the presence or absence of the following most important harmful organisms such as: bacterial diseases - wilt and brown potato rot - Ralstonia solanacearum and potato ring rot - Clavibacter michiganensis subsp. sepedonicum; fungal pathogens - potato cancer - Synchitrium endobioticum perc.; and cyst nematodes - Globodera pallida (Stone) Behrens and Globodera rostochiensis (Wollenweber) Behrens on potatoes (Islam. and Chowdhury, 1998). All samples, were laboratory tested at State Phytosanitary Laboratory, and it was confirmed health status with absence of harmful organism.

Individually, both by years and total for all years from the period of investigation 2014 untill 2017, a survey at „Tabanovce“, cross-border point has the highest number of both performed, visual health examinations and laboratory analyzed samples. The largest import of mercantile potatoes was in 2014 at 3.044 t, and at least in 2017 110 t. The largest import of seed material was imported in 2017 at 7.386 t, while the least imported in 2016 was 842 t. For the period 2014 to 2017, annual import averaged about 2.680 t of seed potatoes and 1.368 t of mercantile potatoes.

This research for the first time explains the importance of mercantile and seed potatoes import in the Republic of North Macedonia from the abroad in the three cross border places, and the quantity and quality of imported material. This study confirmed that the presence of the following harmful organisms (Ralstonia solacearum, Clavibacvter michiganensis ssp. sepedonicus; Synchitrium endobioticum; Globodera pallida and Globodera rostochiensis, has not been established (no introduction, occurrence and further spread). 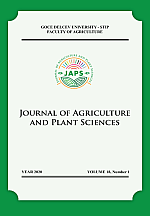